Marriage Tax Allowance allows couples to transfer a portion of their personal tax allowance (the amount you can earn which isn't taxed) between each other. To benefit as a couple, the lower earner must have an income of £11,850 or less. It's free money, so worth checking. 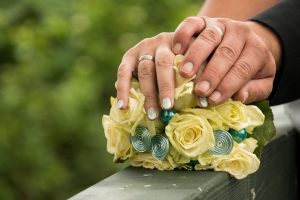 Marriage Tax Allowance Claims – Could You Cut £900 From Your Tax Bill This Year?

If you’ve never claimed the marriage tax allowance the back pay could leave you almost £1,000 better off this year. Here’s how:

According to HMRC figures and a BBC report, there were just over 4 million couples in the UK (either married of in civil partnerships) who could have claimed the ‘marriage allowance’ last year.

Yet, since it launched in 2015, only 2.2 million have done. So if you’re one of the people who hasn’t looked into it because you don’t know about it or you assume you won’t be eligible, it’s time to take a closer look.

What Is The Married Couple’s Allowance?

One of the longest standing and biggest financial frustrations of being in a partnership is when one of you earns less than the current personal tax allowance threshold, but you can’t transfer any of that surplus allowance to your partner.

But in 2015 there was a change. From 2015 onwards, you’ve been able to take 10% of your tax allowance and give it to your spouse/partner in a marriage allowance transfer.

Now, you can transfer up to 10% of tax allowance to your partner, providing you haven’t used it.

As you might expect, there are a few conditions to claiming these marriage tax benefits:

If The Marriage Tax Allowance Was Worth £230 Last Year, Where Does The £900 Figure Come From?

The great thing about the HMRC marriage allowance is you can backdate it to 2015, or as far back as you meet the criteria.

Obviously, you’ll need to have been in a marriage or civil partnership from the point you claim, and you’ll also need to have satisfied the income requirements each year since then to claim the full backdated amount.

Add those together and you reach a total in excess of £900.

As long as one of you continues to earn less than the personal tax allowance and the other remains below the higher tax bracket, you’ll continue to benefit from a £200+ marriage tax boost each year.

It’s also worth remembering that the married couple’s tax allowance can be backdated even if your partner has died since 2015.

How Do We Apply?

This part’s crucial: the person who needs to apply is the lowest earner (i.e. the person transferring part of their personal tax allowance).

You can apply online and it’s a simple process: you’ll just need the National Insurance numbers for you and your partner, and proof of identity.

As long as you remain eligible for the marriage tax allowance, you’ll continue to have 10% of your tax allowance transferred to your partner each year.

What If I Earn Less Than My Tax Allowance, But Not 10% Less?

A curious quirk of the marriage allowance transfer rules means that you can transfer all of it, or none of it, but you can’t transfer a part of it. Even so, it may still be worthwhile doing even if your wages creep over the threshold.

Let’s go back to our teaching assistant, who this year is working a few extra hours and has had a pay rise to boot, bringing earnings to £11,000. The personal tax allowance this year is £11,850, and once again 10% of it is transferable.

The benefit to the partner, however, is £238 and you don’t have to be a maths whizz to work out that on that basis the marriage couples’ allowance is something that’s still very much worth doing.

What Happens If My Wage Fluctuates Month To Month?

The key calculation is the amount you and your partner earn in a year. So if you do some extra shifts that give you a bumper month it doesn’t matter as long as the total for the year remains below the tax allowance threshold.

Similarly, as long as you remain within the 20% tax bracket for the year, it doesn’t matter that, for a couple of months, you earned what would otherwise be a higher tax rate income.

Naturally, neither you nor HMRC will know for sure how much you and your partner have earned in a year until the year is done. If it turns out that you owe HMRC money, they’ll recover it through self-assessment or payroll.

If you’ve not considered applying for married couples tax allowance before and you think you might qualify, do it now. It could save you hundreds of pounds.